1.529 million people in Auckland. Ok.. So let me get this straight… Over 1/3 of New Zealand’s population resides in Auckland. I suppose now I understand why people told me to skip over Auckland when I got here.

Well.. Except they were wrong.

Auckland is an absolutely beautiful city, if you’re paying attention.

Where to start with New Zealand.. Well, first off I’m from the future. 20 hours ahead of Montana so tomorrow while you’re all having Super Bowl Sunday I’ll be enjoying Super Bowl Monday.

I hopped off the plane and headed through customs. After all that fun stuff I was picked up by a kiwi that I had met while he was traveling in the states last summer, James. As we got to the car I went to open the door to realize I was trying to enter the driver side.. Oops, forgot about that. It was surprisingly easy to get used to the concept that people drive on the other side of the road yet every time I go to get in the car I go to the wrong side.

We got to James’ flat where I got to see Cam (who was also traveling in the US last summer). We went and got $4 pizza then headed to Bethels Beach for sunset. It was an extremely windy road (with some wrong turns) and we raced to catch sunset. When we arrived I placed my shoes under the car because they smelled awful after 36+whatever hours of traveling.

It was incredible. I didn’t plan on swimming but as soon as we hit the sand I changed my mind. I did some magic tricks to change into my bathing suit on the beach and we swam as the sun went down.

We got back to the car and left and an hour down the road I realized my shoes were left at the beach.. Oops. Some got a nice pair of Niks.

The next day I stayed around the flat and planned some things out for my trip. We then rode bikes into the city and grabbed lunch at a little cafe with Asher, one of James’ flatmates. My bike had awful breaks so I was squealing across the city.

That afternoon I rode James’ bike up Mt. Eden (and died) for an incredible view of the city.

When I got back to the flat James said “How was the ride? At least you had gears.”

I had gears? Oops. I had rode the whole way without switching gears once. Like I said, I died.

The next day I decided to wander around the city. I stumbled up the NRL fan day where 100s of rugby fans filled the square and all the athletes were signing autographs and speaking. I should have taken a selfie probably.

I also walked down to the queens wharf and continued along the water for awhile. Auckland is a lovely city and everyone is SO nice. James, Cam, Asher, and Steve for the win.

Yesterday we drove to the coromandel. I experienced my first ‘perky nana’ candy bar which was a fairly awful candy bar and I’m slightly confused about the name. After driving through incredible green hills we made it to Cathedral Cove which turns out to be featured in Narnia. It was beautiful.

I again didn’t think I would want to swim and ended up getting soaked in my jeans. Worth it.

We got to see SO many selfies it was ridiculous. Love it.

On the way home we stopped at basically a redneck festival called lead foot. We just drove through the gates without question and went all the way back to where the cars racing leave their trailers, walked in and got mini donuts that were terrible, and left.

Things in New Zealand are great. The people are spectacular. As you can see I’ve been sort of doing the city life thing.

Now it’s time to actually backpack which is why I jumped in a van with a random girl (who hasn’t ever been around cows) from couch surfing this morning and headed to Rotorua where she dropped me off and left. 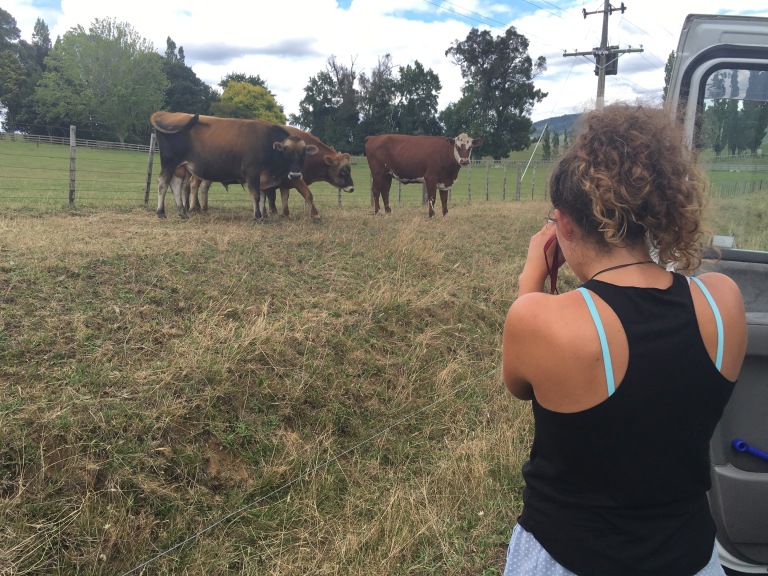