I woke up in my not-so-cozy room anxious to get back into my tent for the upcoming days.

The Routeburn is a three day trek called a “Great Walk” in New Zealand. You have the option to stay in your tent or book a bunk in a hut along the way.

The night before, I was researching a bit about the Routeburn and I kept seeing posts that said “book a shuttle or drive, the road isn’t popular and is 45 mins outside of town so it will be hard to hitchhike.” Good news, I didn’t book a shuttle because I thought I was pointless to pay $120 just to get to the trailhead and it was too late to book one now. Oops.

As I left the hostel I said a little prayer, if all else failed I would hopefully get a ride to the town Glenorchy at least then have a 25k, seven hour trek ahead of me. As long as someone picked me up before noon I would make it by dark, worst case scenario.

I walked for awhile, you see.. hitchhiking takes strategic placement. When a car is zooming by they are much less likely to stop. Also, they’ve gotta have a convenient place to stop. I walked for about 20 minutes before coming to a roundabout. Perfect, cars would slow down to go through the roundabout and just as they came out.. Boom. There is a girl with a huge backpack in need of a ride. Brilliant huh?

I waited around for a bit while cars passed by. My plan wasn’t going so well. That’s when I thought, ‘okay.. I trust God. As long as I have faith I’ll be fine. Maybe He has a different plan, maybe those cars weren’t supposed to stop because someone who was also doing the trek was going to pick me up.’ I’m not even kidding, the next car going by stopped.

Guess what? It was two guys headed to do the Routeburn Track. YES. Thank you Jesus.

We arrived at the track around 10am which was WAY too early considering the first day of the walk is literally two hours. I didn’t really expect to be there so early. Good news, all this meant was I had all day to explore. The guys were actually headed a different way so we parted ways right at the beginning.

I started off the walk and passed over many swing bridges that were absolutely brilliant. There was a stream running by the path and it almost felt like I was back in Montana for a bit. I saw these crazy little Kea birds, two baby birds. They were brightly colored and it’s apparently rare to see the babies like that. I stopped by the stream/river thing for a snack (my favorite, dates) and I read The Alchemist while I listened to the stillness around me. It felt so good to be back outside.

I arrived at camp around 11:30 and set up my tent. It was pretty cold and I was being eaten alive by sandflies so I hopped in my tent for a moment to escape them. I read for a little while so I could warm up then went back out to explore. The camp was an open, flat area near the water. Across the way was a valley and I decided I should probably check it out.

What I didn’t realize was that I needed to cross the river. Ok, so I got to my roadblock. I thought hmm, if I just shift some rocks I can make a little path across this thing. Sounds like a good plan right? Wrong. 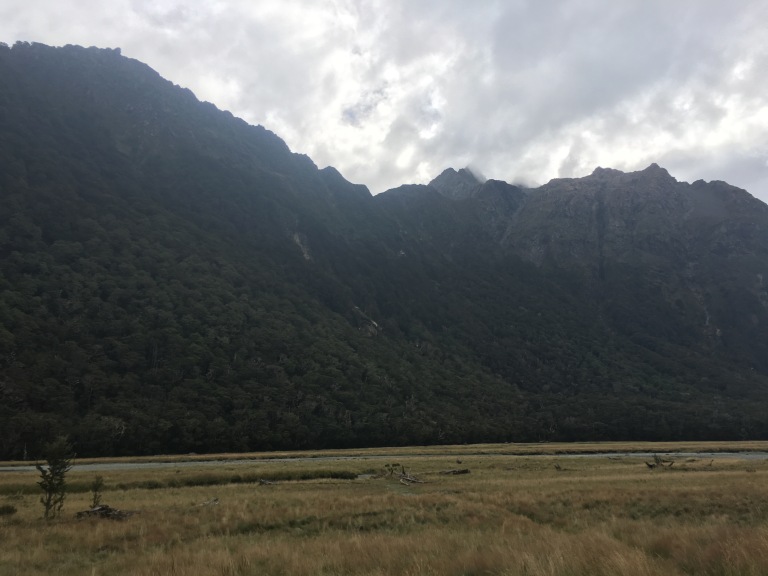 I went to step on my nice path and the rock shifted and my feet were SOAKED. The rest of the day my feet were freezing cold but I got to explore the valley a bit and on the way back I made it safely across the water.

That night I met a couple from Colordao and three German girls while I was making dinner. Guess who happened to show up? Steph. This was a girl I met my first in New Zealand who I rode to the Tongariro crossing with. It’s so weird how often I see people again even all the way on the opposite of the country. 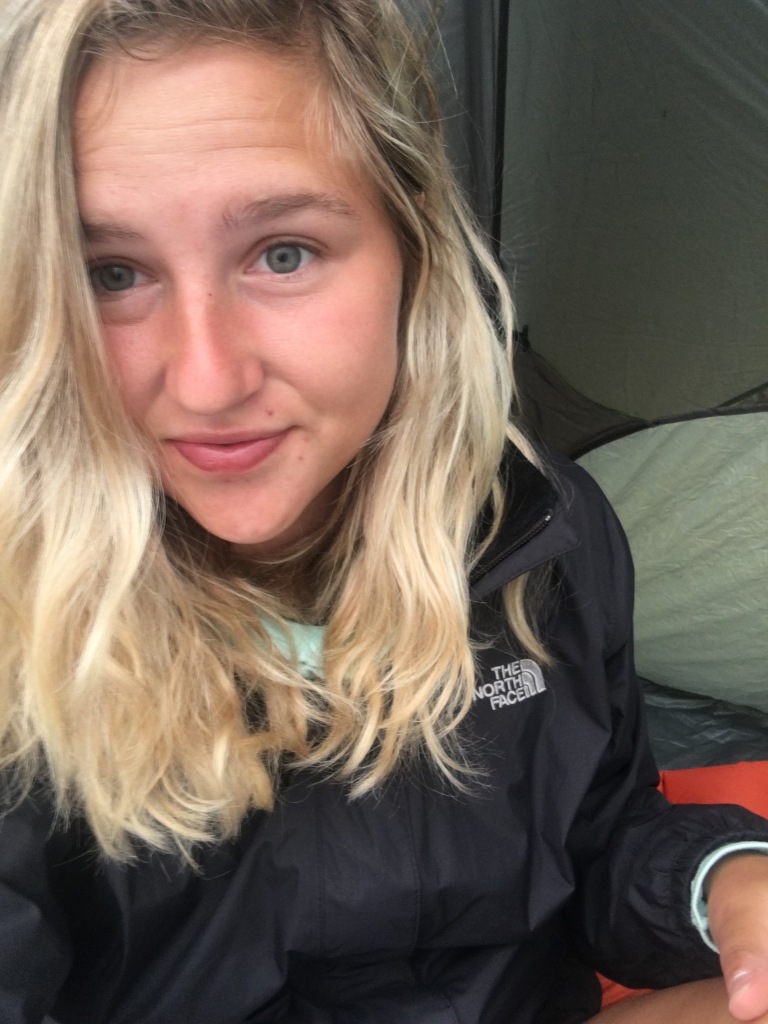 I decided to hibernate for the night because it was pretty cold out. I woke up around 3am and every hour following because I couldn’t warm up. I have an awesome sleeping bag liner and I cinched it up, only to wake up practically suffocating myself. Oops. I was the first one outta camp around 8:45 that morning and headed off in hopes of beating the bad weather that was supposed to be coming. I walked past the hut and saw smoke from the fireplace, so lucky. I was freezing.

The beginning of day two started pretty steep, plus having a huge pack makes it a bit tougher. (Ok fine I’m a wimp) ok here is a secret. I love being outside but I always sort of start my hikes with a negative mindset. I don’t know what it is but after like 20 minutes I finally shift into excitement. I had a 14+ kilometer day ahead of me. I arrived at the next hut that people can stay in around 9:30. It had only taken me about 45 mins. There were incredible waterfalls and it was so foggy out that it looked like I was in some fantasy place.

The Routeburn Falls hut was no joke. It was literally like a lodge on the mountain. I couldn’t believe it. I continued on past the hut and was behind a guy with similar pace so I kept a distance to avoid the awkward hiking thing where you kinda wanna pass but you are so close in pace that it gets weird. 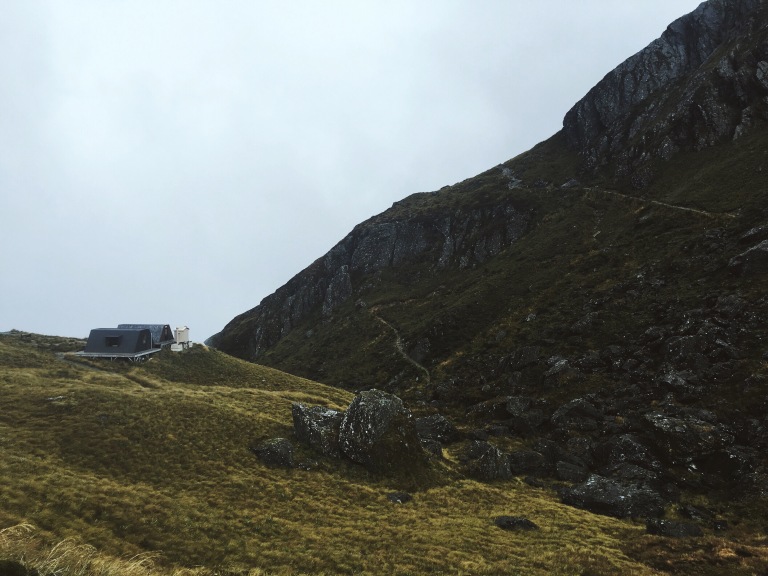 For the next hour I trekked over alpine terrain. I couldn’t really see much honestly. It was so foggy. It was a steady uphill trek. Fairly easy. I arrived at the saddle around 10:40 so it took me just over an hour to reach that point. I stopped at a little shelter to warm up and avoid the insane winds that were blowing me away. The guy I was trekking behind also was in the shelter. He was a German guy traveling alone. I offered him some of my dates (food guys, I didn’t ask him out.) and he laughed at me and and offered a cookie. Fine. But dates are SO good. (Lol practically the way to eat sugar and pretend to be healthy)

I headed out from the shelter thinking the next part would be the downhill portion to the next camp. Wrong. It just kept going up. The mountains were full of waterfalls and it began to rain. It was hard to see anything but apparently you can see the ocean and beautiful mountains usually. I used my imagination.

Finally Lake Mackenzie came into view and I began my decend. It’s always easier on my lungs going downhill but so much harder on my body. It was steep and rocky and I kept slipping because everything was wet from the rain. I finally arrived at camp around 12:30. Not sure how I made it so quick.

I was the first one to the tent sites, again. These spots were more secluded which I liked. I set up my tent then made some instant coffee and headed to the lake the read. 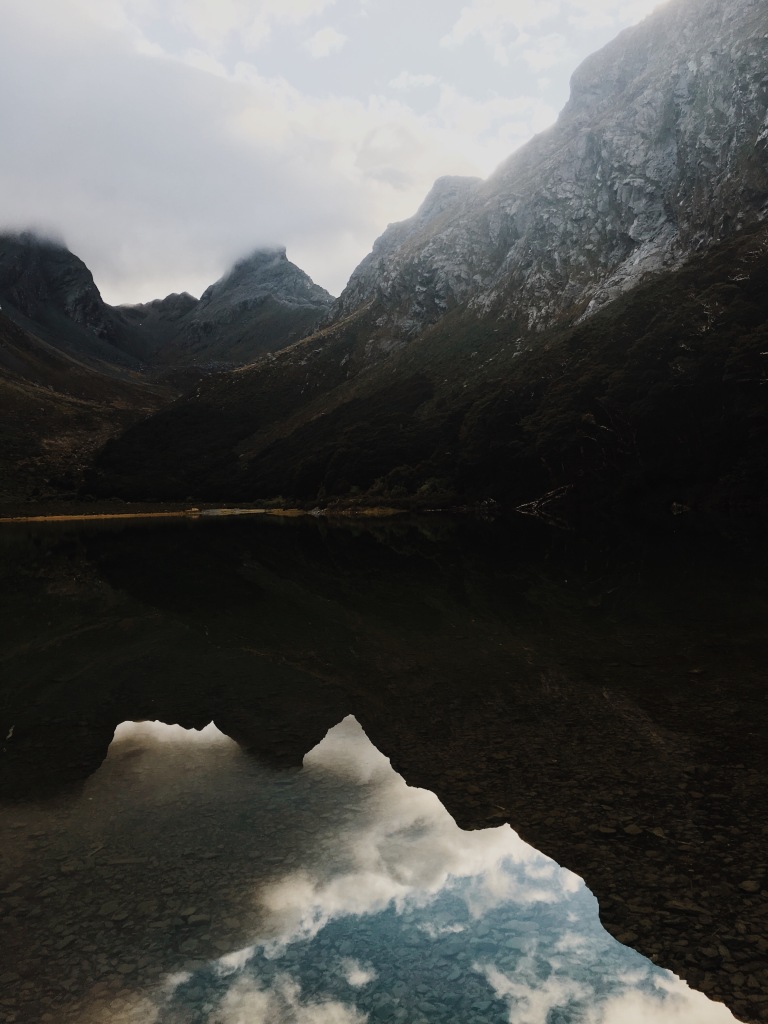 Steph was the next to arrive to camp and there wasn’t anyone else until around 3. The wind started picking up in the afternoon. It was pretty cold, maybe 5 degrees Celsius (40ish degrees Fahrenheit). I was doing my best not to hibernate because I knew if I went in my tent I would not get back out. I’m a baby in the cold.

The couple from Colordao arrived at sat at the table with him. Emily and Pete. Her sister actually goes to school in Bozeman. As we were talking he offered me a ride to my hostel the following day so I wouldn’t have to hitchhike out. Thank goodness. What a relief. They had just gotten engaged on the Abel Tasman Great Walk which was pretty cool. They said the night before the Kea birds had put a hole in their tent and apparently they were pestering everyone. I don’t know how I got lucky and didn’t have any issues.

We did a little side trip to split rock (very little, like 10mins) and headed back to camp. They were playing Gin Rummy and invited me to join. Another guy, Clouse joined as well.  I didn’t do so bad, even got close to winning a couple of times. Maybe we should have played poker, I definitely could have won that. (Thanks Dad)

A fill in for the Doc warden came by to check camp tickets. Apparently the actual warden had to go up the track to help someone down. Scary.

That night it poured. It was raining so hard, thank goodness for my REI tent. I love it. I packed up and headed off with the couple in the morning. The first hill was bigger than I expected and I was still in my negative mindset so I was not a happy camper. But, the rest of the trail was pretty much flat or downhill and so easy.

I’m terrible at setting the pace. I usually go too fast so I decided to stay at the back so that I wouldn’t be forcing them to trek a different pace than they wanted. It was quite cloudy but we still got to see some amazing waterfalls and lots of cool trees.

We arrived at the bottom and packed up. Their car had a leak in the radiator so we crossed our fingers in hope that we would make it back to Te Anau without trouble.

Good news. We made it.

They dropped me at my hostel and I got to watch a creepy carnival get set up. Not a fan of carnivals.

Overall the Routeburn was a pretty great trek. It was much easier than I expected (could have done it in a day. Two max) and although I didn’t get to see much because of the weather it was still an incredible walk. (Despite the cold and the sandflies)