“So, is Donald Trump going to be your next president?”

I have been asked this question by at least 15 people from 15 different countries. I guess all I can say is I sure hope not.

When I am finished with my trip I’ve decided I need to start learning more languages. I don’t care how hard it is or how long it takes. I have to.

Everyone knows multiple languages meanwhile I know how to have a surface level conversation in Spanish and even then it’s more like Spanglish.

So, back to the trip. I was dropped off in Rotorua where I found a hostel called the crash palace. I was pretty exhausted and anti-social and sort of just caught up on some writing, reading, etc. The next day I checked into the hostel I had actually planned to stay in called Rock Solid which had an indoor climbing gym. YES

As soon as I got there I threw my bags in a storage room and met a girl named Yasmine who I went to Wai-o-Tapu with to check out the geothermal pools. On the bus there we met another woman from Mexico City and she joined our walk.

It was pretty incredible but the sulfur smelled awful. It made the entire town smell awful. The water was actually crystal clear but the pools reflected the colors of the rocks and such. 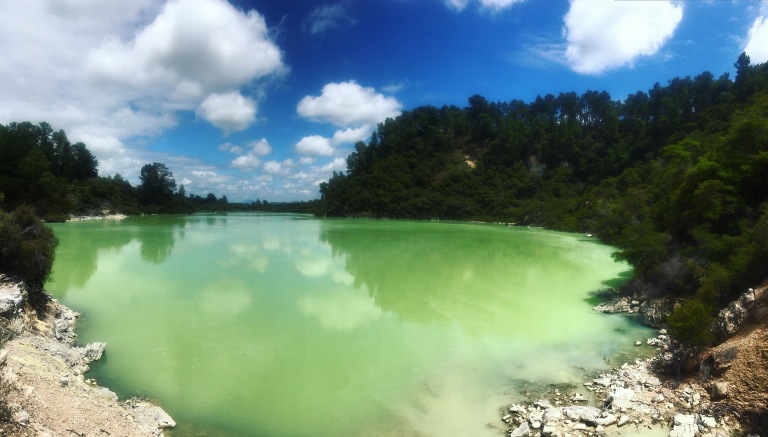 When we arrived back at the hostel I met two Australian boys. They wanted to feel like they were actually traveling alone so their parents dropped them off at the hostel and they’d catch a bus in a couple days. Too funny. We met another German girl Lea and all went for a walk. That evening we met tons of other backpackers and played pool.

The next day Lea and I went hiking in the Redwoods with a guy I met from couch surfing.

We chose a loop that ended up being pretty much the only path that left the redwoods and entered a boring part, natually. There was a natual hot mud pool that was pretty anazing.

We sort of left the path a bit and ended up somewhat lost. We saw a guy from Singapore who was also lost so we sort of just combined walking and made it back to celebrate. We attempted a jumping photo, yeah.. attempted.

The redwoods were amazing while we were in them.

That afternoon I climbed at the indoor wall with the Australians. Climbing in New Zealand is so much different. You don’t have to be certified or anything to show that you know how to belay and climb, and their technique is much different. It was pretty cool to observe experienced kiwi climbers.

Later we watched a French film at the cinema which was brilliant. It was a fascinating film that everyone should watch. The Australians were even crying.

We met up with people from another hostel that night and played backstreet boys all night. No matter who you are or where you from people love a good backstreet boys jam. Of course we also had to throw on James Bay since I was missing his concert in Auckland. Sad

Through couchsurfing I met an Australian girl named Courtney who would also be hiking the Tongariro Crossing the next day. She put me in touch with Steph and I jumped on a bus to taupo. We waited in Taupo for the day and blended in with the locals. (Walking with hi ge packs.. Natural.) Courtney picked us up there and we drove to a campsite a couple of hours away.

When we arrived everything was so full that we eventually just parked in the middle of the road. (After reversing, driving over steps, etc)

We set up our tents (Courtney had a four person tent so she was sort of in a castle) and crashed.

The next morning we got up early to start the hike.

We hiked through incredible alpine terrain and ended up summiting two peaks which left us with an 18 mile hike.

It was the first long hike I have done since my surgery and it felt so good to get back on the trail although on the way down I could definitely feel the pain.

I have a fairly fast hiking pace so I would get pretty far ahead and be able to wander off track a bit to get some incredible views while Courtney hiked up.

It was one of the most incredible hikes I’ve ever done and something so different than most.

After a long hike we headed in the car four hours to wellington. When we arrived at the air b&b we apologized for getting in so late only to get the response “uh.. We are guests here” oops.

The next day Courtney left and I walked three miles into town with my pack to find my hostel. I spent the day wandering in the city, drinking amazing coffee and face timing my mom and sister. (I had finally found somewhere with free unlimited wifi!)

I had been in touch with Anton, a Swedish guy who I met while playing pool in Rotorua. He was also in wellington and looking for a hostel but everything was booked. I heard the woman  working at mine on the phone, she mentioned a cancellation so I told Anton and last minute he was able to get a bunk. We decided to check out some museums and went to grab something from our rooms only to find out we were in the same room and in the bunks right next to each other. What are the odds.

The museum was pretty incredible (and free).

Huge pieces of art looked so real. We laughed when we probably weren’t supposed to.

Anton and I wandered through and of course got into the role. He WAS art.

We took the cable car up (after getting lost and passing the sign 20 times) and got a nice view of wellington and wandered through some trees. 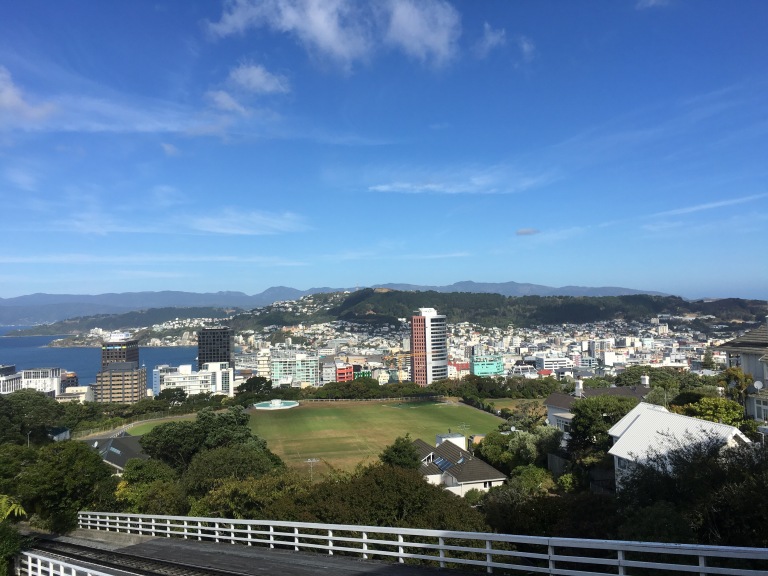 We discussed travel plans and our ideas lined up pretty well so we decided we should rent a car together for three weeks on the South Island. Wait what?

I am renting a car with a complete stranger to travel for three weeks? Ok.

We got up the next morning and called a car company. They had just had a cancellation and had one car available. We took it.

We got on the ferry to cross over to the South Island and I was essentially blown away with the wind.

FINALLY ON THE SOUTH ISLAND. I went to a park by the water where I met a Danish guy and French guy. We played frisbee for awhile and later I met back up with Anton.
Today we will pick up our car and start this next journey. Wish me luck on the opposite side of the road.