The land down under. Now, take it to consideration I just left my new favorite place in the world (New Zealand) so I sort of had this mindset like I wasn’t going to like Australia THAT much.

I arrived in Sydney fairly early in the morning. I got an Opal card from the airport and headed off on the tram. My hostel was located right next to central station so I walked over to leave my bags so I could begin to explore the city.

I walked down to Circular Quay and grabbed breakfast at a fancy cafe on the wharf with a spectacular view of the Sydney Opera House and the Sydney Harbour Bridge. I had to guard my muesli as many birds were quite interested in my seedy breakfast.

I walked around from there and I got to admire the incredible architecture of the Opera House (which I know nothing about). I decided that in order to get the full experience I should probably see a show there so I went in to purchase a ticket. The gentleman at the ticket window cut me some deals and got me a $170 ticket for $52. He even used his “buddy pass” on me. Such a nice old man.

I walked back to my hostel to grab a swimsuit because I decided since it was 90 degrees out I should probably check out a beach.

I then took the ferry to Manly Wharf. This is a common way to get to Manly Beach as you get an incredible view of the Opera House from the ferry (some people even just go on the ferry to see the opera house but that’s boring. Come on people.) 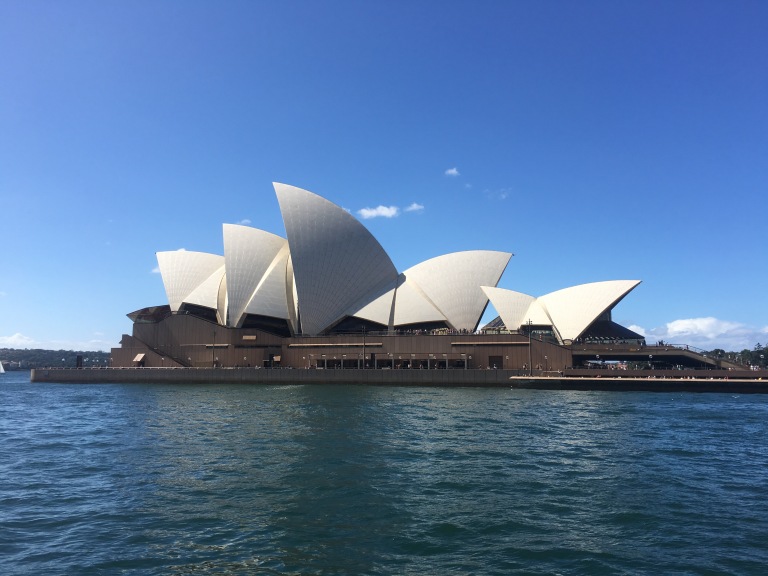 I arrived at the wharf and followed the crowd of girls with bikinis on because I figured they were headed to beach and I had no idea which direction to go.

Woah. I hit the beach and it was beautiful. I honestly have been taking terrible photos while I’ve been in Australia but I promise it was prettier than the photo shows.

I absorbed some rays and the probably destroyed my skin a bit since I wasn’t wearing sunscreen but hey… Worth it. (Ask me again in 40 years)

The waves were so intense that the lifeguards had to announce for everyone to get out of the water. On the way back to the ferry a Thai woman asked if I wanted a 20 minutes neck and back massage for $10. Yes please.

Suddenly I realized here I was getting a massage when a week ago I was hitchiking and getting blown away in my tent. I knew my Australia experience was gonna be different. (And that’s ok)

That night I met a girl, Sandeep, who asked what I was doing the next day. I told her I was thinking about heading to Bondi and she was as well. That morning we headed off along with a new Japanese friend Ken.

We arrived at Bondi which was so amazing. The sand was so fine and soft. Ah. Too good.

We saw a camera crew and realized they were filming for the show Bondi Rescue. It’s pretty funny because they had tons of people packed into one little area to make it look like the beach was super packed. Liars.

We set up our spot and ran into the waves. We spent forever in the water body surfing (well mostly getting smashed by waves). I finally got to the point where I was essentially drowning while standing up out of the water because I swallowed so much salt water so I decided to get out.

We walked around by the beach and grabbed lunch. We saw these crazy little one wheel boards and lots of mostly naked people. (I really don’t understand the new bikini bottom look for girls. It’s essentially like wearing no clothes. Yikes) 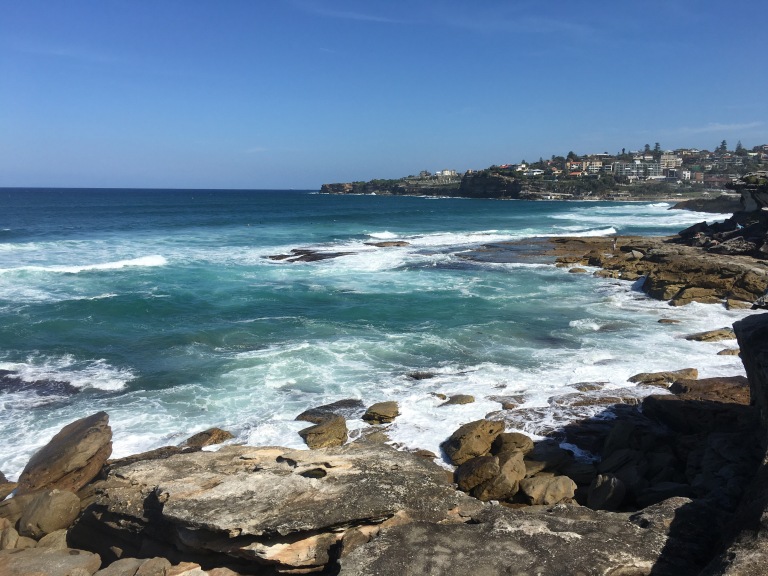 We then did the Bondi to Bronte coastal walk and passed by a couple of other beaches before catching a bus back to the city.

When we got back to hostel we laid on the rooftop hammocks at the hostel. So relaxing. I read my book and tried to rehydrate. 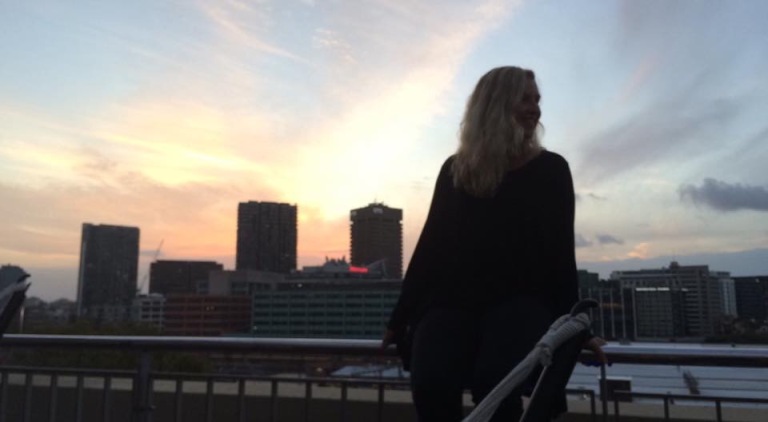 Sandeep and I walked down to the wharf and listened to street performers and blocked the view of these beautiful iconic structures.

We went out for food that night with a big group of new friends. (Becky, Desiree, Ben, Monica, Ken) later we danced at a place where like all backpackers go which was okay just because of the group but essentially pretty boring.

My roommates were so fun. We all stayed up super late talking and joking in the room. I had never had a hostel experience like that.

The next day I went to the Australian Championships for Track & Field which doubled as the Olympic qualifier. I went alone of course (I actually love doing things alone. I’m so weird). I got there way too early and had to watch the young groups which was still cool.

When the professionals started on my goodness. It was incredible to watch all the athletes perform. I was of course drawn to watch the high jump all day but wandered around to all events.

It was so hot out but they had bean bag chairs all in the grass which was actually a pretty cool addition.

That night the new group of people I met at the hostel all took a bus to the Ivy. (The hostel organizes event night type things so that you meet people easily.) there was a rooftop pool and we just danced for awhile.

Eventually we all decided to go back home. I was keen to walk but everyone else wanted an uber and I couldn’t go alone at night so I hopped in with everyone else.

The next day was wonderful. I walked to two different cafes early in the morning that were SO good. Wonderful coffee. (So tired of instant)

Then I went to Hillsong Church and wow. Being surrounded by so many people worshipping God was just so amazing. It was such a special experience. 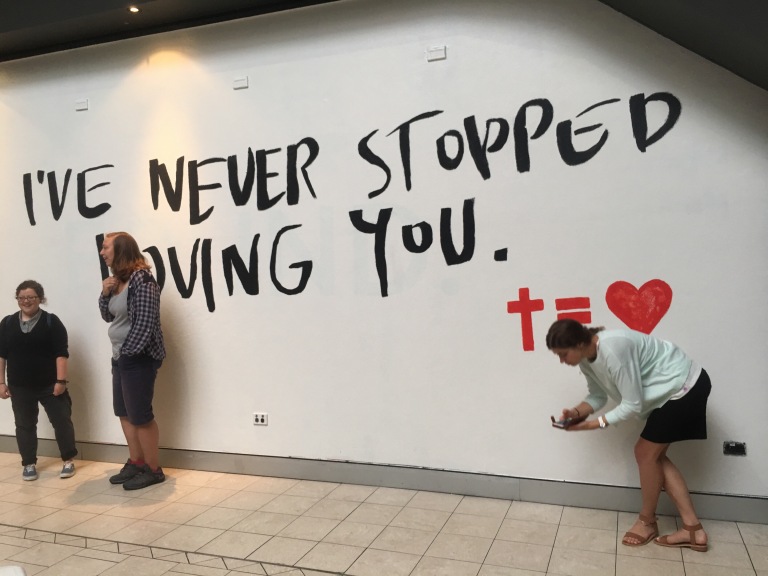 I finally got my hands on a copy of Sandcastle Kings so no one has to hear my alchemist quotes for awhile. New book to read finally.

That afternoon I went to the performance at the Opera House that I had purchased tickets to. It was Cinemusica which was an arrangement of string and percussion performing music from horror films.

The inside of the theatre was incredible itself but the performance, wow.  You’re not allowed to take photos though sorry people guess you’ll just have to visit for yourself.

I had increible seats. How do I know this? I was surrounded by wealthy looking old people while most people my age were about 30 rows further back. (Thanks again ticket guy)

I couldn’t believe how intense the music was. I didn’t realize how much it affect the scenes in a horror film. I would feel my heart beating faster and faster as the sound increased or changed to screeches and stuff. (That was the worst description of all time but just trust me.. It was crazy)

I left the performance feeling fancy and relaxed at the hostel for the evening.

That’s part one. Stay tuned for some more beaches and jumping out of planes and stuff.

One thought on “Sydney | Part One”