From feeling fancy to being caught in a rain storm. Sydney was a bit of a wild card but at least a nice man offered is umbrella. After attending Cinemuisca at the Sydney Opera House I opted for a relaxing evening. I hung out with some new mates on the rooftop before we went out for a walk and got caught in the rain. Needless to say the night was cut short. (We probably should have turned it into a puddle jumping night but oh well, you win some you lose some – speaking of which I already wrote this whole post and somehow deleted it instead of posting it so yeah.. I lost in that case)

Okay continuing on. The next morning I walked around to some different cafes before James and I headed over to Darling Harbour. This is a neat area of Sydney although we didn’t do much, just a casual walk around. Of course the KPMG building caught my eye… Well placed. I also tried my first frozen Coke which apparently gets a lot of hype so that was neat.

That evening James and I took a walk to find the “Kanye Loves Kanye” mural. Classic.

So here’s the deal. Kanye wanted the painting down so bad so the artist gave him an offer. In order for him to paint of the mural he wanted $100,000 and a lifetime supply of Yeezys.

Guess what? A week later the mural was painted over (the artist left one pinky. Too funny). Well done to the artist, PLEASE SHARE THE FORTUNE (just the yeezys thanks)

Later that night I discovered that not only was New Zealand a small island (like I mentioned a million times) but this whole world is so small. Brett, a Canadian that I met in Dunedin NZ was flying into Sydney for the night and happened to at the same hostel in the same room. What’re the odds. 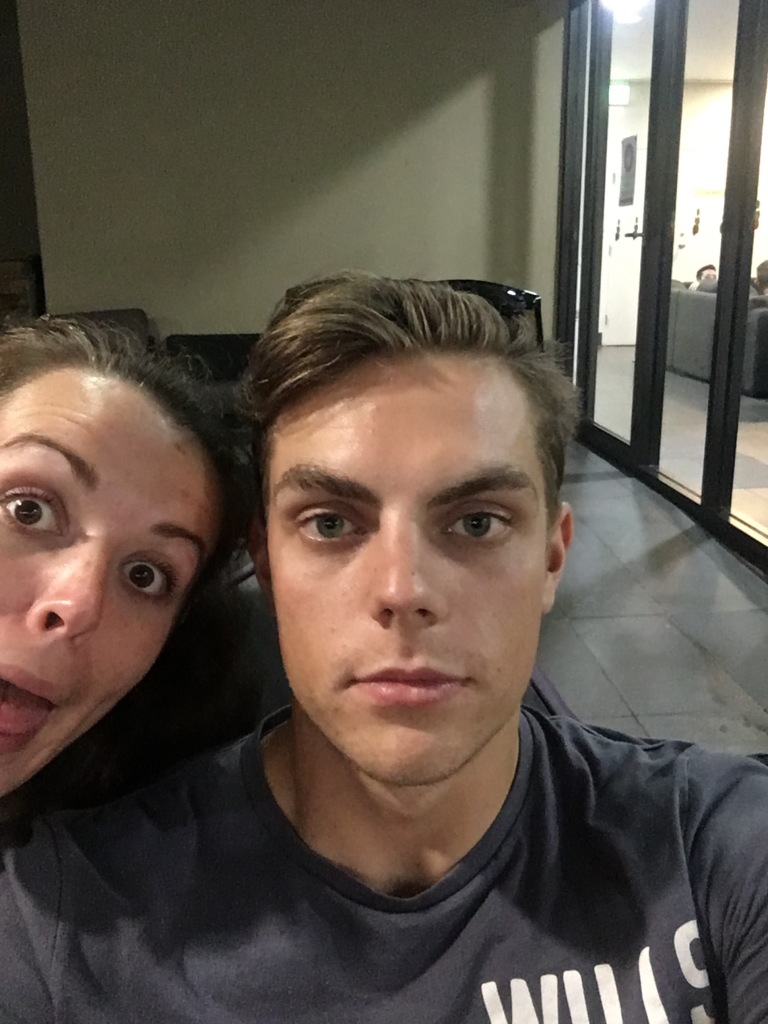 We all just hung out that evening and I got to know some pretty cool individuals.

A little later in the evening a new face showed up and he and drank entirely too much or something and ended up trying to fight everyone and then just passed out. The hostel employees took him to the couch in the lobby and he was there til the next afternoon. (I’ll be honest I was part of the “take care of him crew” temporarily putting towels and a garbage can out and stuff. During this time I may or may not have gotten a photo of him but that would be too mean to post.)

Anyways, the next day was okay. I mean it’s not like it was one of the best days of my life or anything…

I woke up early and headed over to the shuttle where I had an hour long ride because I was doing the only beach skydive in Sydney so it’s a little ways away.

Once we arrived in Wollonglong we all got our gear and learned the techniques we would be using. I met a couple of really cool girls. We discussed the fact that we had all decided to do this within the two days prior. Last minute

I usually don’t get nervous for things like this until right before I do them, and by that point in able to just jump off the cliff or whatever it happens to be. This was different.

My heart was beating out of my chest.

I met the instructor who would be jumping with me (also found out he has jumped in Kalispell Montana before) and we headed off in another shuttle to the airport.

We all loaded in the plane. I was in the back of the group in the plane right next to the pilot. While taking off he was eating a sandwich. Come on man, are you trying to give me a heart attack?

We were pretty high up when I asked my instructor if we jump from that high. His response? “We jump from more than 3x this height and you free fall further than this.” Oh. Okay.

Eventually we got to the jumping height and one by one people jumped out. I was last due to my last name (felt like elementary school all over again)

As soon as we jumped I was overcome with a feeling that is indescribable. It was incredible. I could not stop smiling.

After about of a minute of feel like I was in a vortex we pulled the parachute and began to float through the sky. Wow. 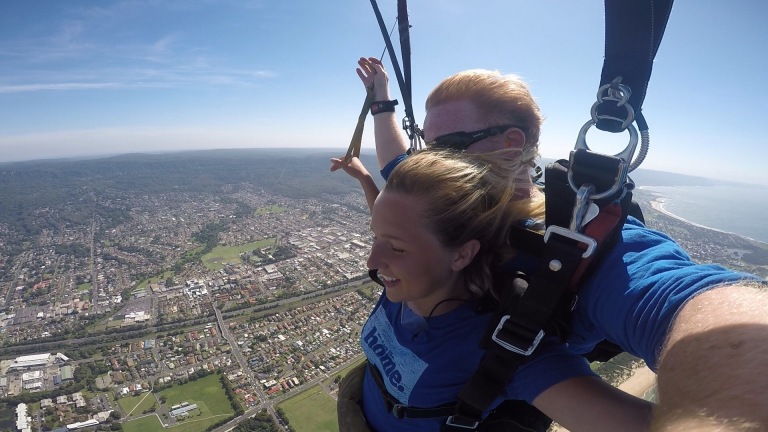 I had the most incredible views of the beach. I asked the guy if we could do some tricks. “Show me what you’ve got”

So uh… All I had were some sharp turns and spins at which point he took back control before I killed us both. Good thinking dude.

We landed safe and sound (thank you Jesus) and might have accidentally landed our parachute on someone. Oops. I was speechless. Such an incredible experience.

Afterwards Fabiola and I grabbed coffee and tried to communicate what we just experienced but neither of us could find the words.

The next day I hiked to Manly Beach to relax for the day considering I had just been a bird the day prior. Felt like I deserved to tryout the beach bum thing now.

I wandered through the streets of Manly before taking the ferry back to the city. That evening I walked around the Harbour.

It’s pretty amazing how different something can look in the dark compared to the light. Everything is so relative in regards to each persons perspective.

It began to rain and I decided to go to the cinema and watch Eye in the Sky.

The next day I began my journey to what would later become one of my favorite cities in the entire world, Melbourne.

One thought on “Sydney | Part Two”